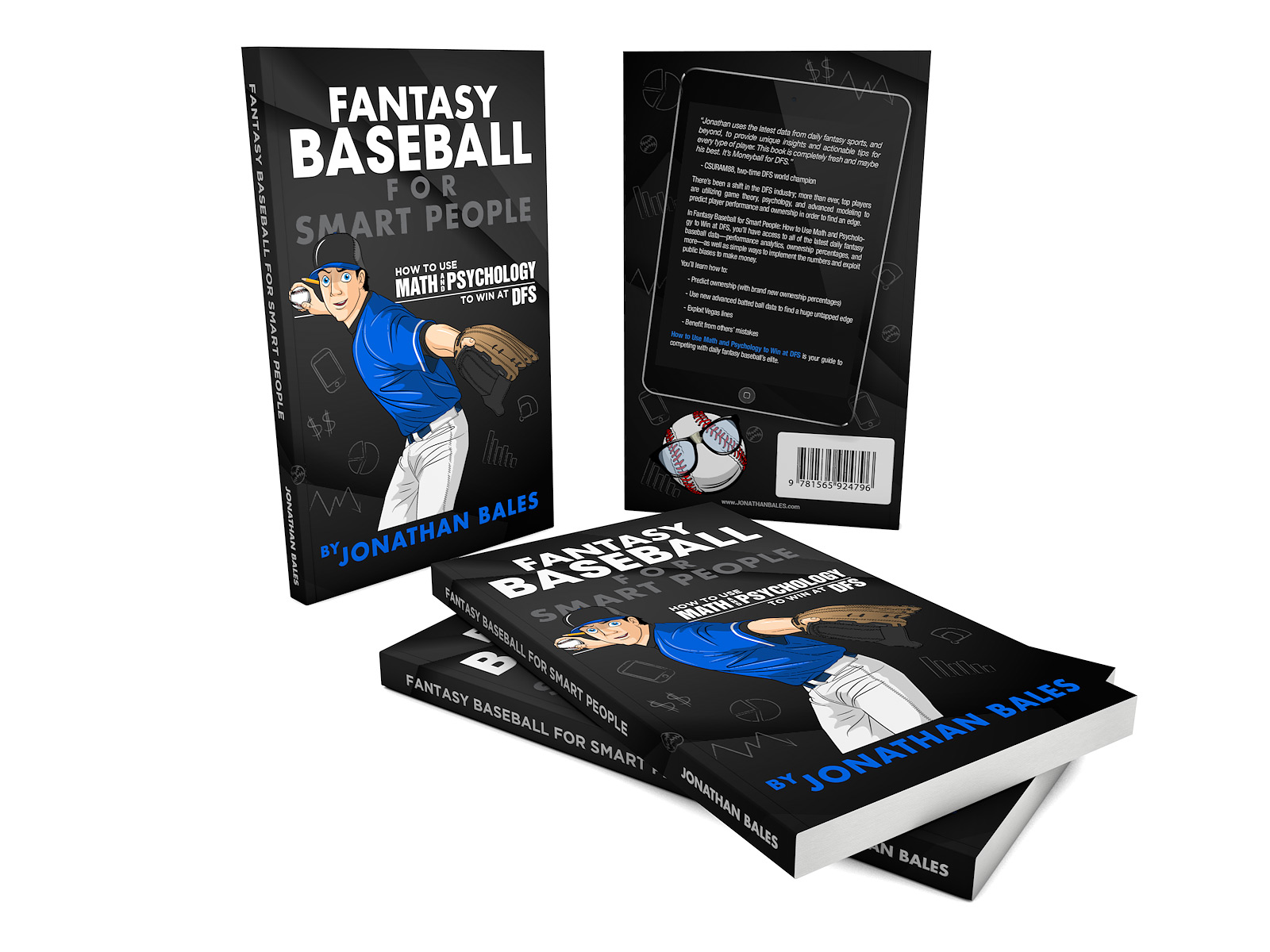 I published a book.

“This is a tremendous “book.” Terrific (not terrible) advice that will help everyone WIN again – even the haters and losers!”
– President Donald Trump

“Probably my favorite book ever.”
– Jesus

“Jonathan uses the latest data from daily fantasy sports, and beyond, to provide unique insights and actionable tips for every type of player. This book is completely fresh and maybe his best. It’s Moneyball for DFS.”
– CSURAM88, DraftKings $1MM Champion

First, I just want to thank everyone who was able to review my new book. I have to confess that I did make up one of the quotes; I don’t even know CSURAM88.

The book is titled Fantasy Baseball for Smart People: How to Use Math and Psychology to Win at DFS. You can buy it here:

So you might be saying something like, “Jonathan, you’re an amazing writer – my personal favorite and that’s really not even up for debate – and I’m going to buy this book in all formats no matter what. But what makes this one different from the previous books in your incredible Fantasy Sports for Smart People series?”

What’s included in ‘More!’ you ask? Well I guess you’re gonna have to buy the book to find out, silly.

There’s been a shift in the DFS industry; more than ever, top players are utilizing game theory, psychology, and advanced modeling to predict player performance and ownership in order to find an edge.

In Fantasy Baseball for Smart People: How to Use Math and Psychology to Win at DFS, you’ll have access to all of the latest daily fantasy baseball data—performance analytics, ownership percentages, and more—as well as simple ways to implement the numbers and exploit public biases to make money.

You’ll learn how to:

How to Use Math and Psychology to Win at DFS is your guide to competing with daily fantasy baseball’s elite.

1 Intro (and My DFS Strategy)

2 Psyched Out: How to Overcome Biases in DFS

A rundown of various psychological biases that affect daily fantasy baseball players, including how you can overcome and exploit them

A mirror image of Chapter 3, but for pitchers

The newest lineup data from FantasyLabs showing the percentile ranks of certain types of lineups—how often they finish in the top 1%, top 5%, and top 20% of DFS tournaments

The tendency to search for, interpret, focus on and remember information in a way that confirms one’s preconceptions

My first day of college is what you might describe as #notgood. I had to do those freshmen icebreaking activities. If hell exists and I end up becoming a resident, I imagine I’ll be forced to take part in icebreaking activities for eternity. Just awkwardly lifting strangers through a tire swing for no apparent reason whatsoever, forever.

One of the outstanding icebreakers we had to do was sit in a circle so everyone could see you speak—already a nightmare—and take turns telling two truths and a lie. I’m sure you also played this at some point as a freshman or at a new job. Classic game, really puts you in the mood to get stuff accomplished right after you go into the bathroom and kill yourself.

So like half the people say their three sentences and everyone is guessing what’s a lie and what’s not, seemingly having an actual fun time, which put me in the worst mood. Like how are you guys enjoying this?

Then it’s my turn. I’m nervous. I had like 10 minutes to think of what to say and I have nothing. Also, another relevant data point: I had a blonde mohawk at the time. I don’t know if I thought that would be zany or help me talk to girls or what, but I’m sitting there trying to be a serious human being with a blonde mohawk. What a cool, wacky guy! So things are already not looking good for me. Then I speak:

“I have two half-brothers.”

“My favorite food is pizza.”

“I once strangled a man to death.”

“Nope, I have three half-brothers.”

This did not cause the roaring laughter I thought it might. Just silence, again, as a group of 20 stared at someone they all quietly thought might be a serial killer even before the game began, now absolutely certain he’d murdered before and will do it again.

I didn’t make any friends from that freshmen year seminar. I did end up making out with one of the girls from that class—Sup Amanda? Can’t believe you’re married now. Hey why are you reading this, anyway?—but no friends.

And it was all due to confirmation bias; they just couldn’t get over the fact that I had bad judgement with hair. There might have been some of the murdering thing sprinkled in there too, but I think it was mostly the hawk.

The confirmation bias is difficult to overcome. Even when you’re aware of it, it’s challenging to not let your first impression shape how you analyze future data. Of course, building a model helps with this.

In terms of exploiting others, any time DFS players are put in a position to assess new information—players on different teams, for example—there will be susceptibility to the confirmation bias. If new evidence fits with preconceptions—even in the slightest—people will probably overreact to it. And when it doesn’t, they’ll be too slow to change.

One example of this is Coors Field last season. If you look at the data, stacking Coors was far worse than in past years, for a variety of reasons (raised fences, dramatic increase in player salaries, better pitching, and so on), yet DFS players still stacked Coors at ridiculous rates. As I’ll show in the lineup analysis chapter, Coors actually ended up being a mediocre stadium in which to stack—mostly due to the high ownership percentages, which were the result of confirmation bias and an inability to quickly adjust to new data.

For the record, I’m not saying to fade Coors—just that it probably ain’t what it used to be for DFS players. Maybe.

We know that a player’s spot in the batting order is important. Very important. But is it okay to give up some of that value to move down in the order in GPPs if it helps differentiate your lineup? I sorted all lineups on DraftKings last year into buckets based on the average position of the batters used. 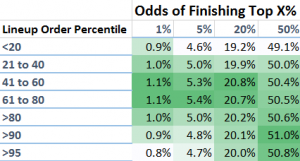 This is not surprising to me in the least, as emphasizing lineup order maximizes your chances of finishing in the top 50% (even in GPPs), but perhaps hurts your upside a bit. Note that I do not at all think you should be skipping over guys at the top of the order when you stack, but rather that you don’t need to go 1-2-3-4-5 every time and, in certain spots (like stacking Coors), it can make some sense to drop down in the batting order to get exposure to the game.

I really do believe a lot of this data could be caused by a couple very common stacks: 1-2-3-4-5 and 1-2-3-4. Those are the two most common stack combinations on DraftKings, and it isn’t close; last season, they were used over twice as much as any other specific four- or five-man stack. In any given night, the most likely stack is very likely to be 1-2-3-4-5 at Coors Field (or on the highest-projected team of the night).

To show you should still be emphasizing lineup order in GPPs, take a look at the 10 stack combinations that cashed at the highest rate in DraftKings tournaments last season.

Here’s the frequency of each spot in the order in these 10 combinations.

This data is really interesting because it fits with the individual numbers from the chapter on batters. Remember this? 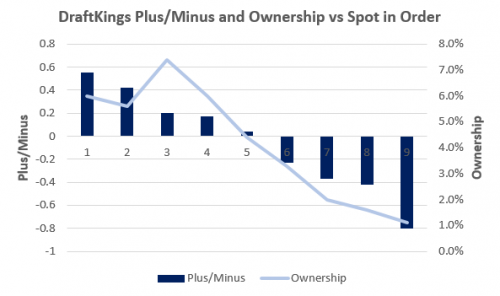 That led me to conclude that 1) No. 1 and 2 hitters are underrated, still, and 2) while you obviously shouldn’t be blindly forgoing No. 3 hitters, it’s probably the most overrated lineup position on DraftKings. It’s interesting that three of the top four stacking combinations last season did not include what’s typically considered an essential spot in the batting order. Even though you’re almost always giving up some point upside, I think using a 1-2-4-5-6 combination (and other similar variations) is a simple way to improve the actual win probability of your DFS lineups.

Now let’s talk about the elephant in the room: pitchers, who were in all 10 of the most successful stack combinations last season. Pairing a stack with the starting pitcher on the same team isn’t an extremely common practice in DFS. Last year, of the top 160 most common stacking combinations, a pitcher was included in exactly zero of them. None!

I think the lack of stacks with a pitcher is probably related to the narrative that if an offense goes off and gets up to a big lead, a pitcher might let up a bit. That might be the case, but apparently the correlation between a stack performing well and a pitcher getting a win more than makes up for it. Last season, teams that scored at least seven runs won 88.1% of games, and those that registered double-digit runs won 96.0% of their contests.

Part of the reason stacking with a pitcher has been beneficial is likely due to its relative unpopularity, but even so, it’s likely it will continue to be profitable this season.

I recently went on a NASCAR DFS podcast. I literally cannot name five drivers in the league—is it called a league?—but I just started playing daily fantasy NASCAR, had some big cashes, and they asked me to come on to be what had to be the least informative guest in the history of podcasts.

I did ask a lot of questions to the host, though, one of which was related to the salary cap: because NASCAR is so volatile, is it smart to leave a lot of salary cap on the table? The answer was more or less yes.

Well, baseball is volatile too. Whereas it would be a disaster to consistently spend sub-$49k on DraftKings NBA lineups, even in GPPs, that’s not necessarily the case in MLB. Further, don’t forget that stacking creates so much lineup overlap that leaving a bit of cap on the table might be a means of being contrarian.

Here’s the data on success rates by the percentage of salary cap utilized. 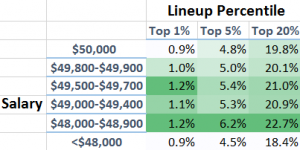 This is interesting to me. Using the entire salary cap on DraftKings—which was done in one-third of GPP lineups last year—has returned below-average results. The numbers gradually improve as less cap is spent—up to a point.

So should you be spending the entire salary cap? In cash games, you should be close, typically. In GPPs, I think there’s probably good reason to leave some cap on the table—especially in short slates or other times when there will be a lot of lineup overlap.

The numbers improve quite a bit in the $48,000-$48,900 range, but some of that could be a selection bias; many of those lineups were in shorter slates, and I imagine they could also have been created by above-average DFS players who understand they don’t need to spend every last dollar.

In general, I believe you shouldn’t spend 100% of the salary cap in GPPs, but be smart about it. In large slates if you know you’re already acting in a contrarian way, it probably doesn’t matter. In short slates, two of my favorite strategies to be contrarian are 1) not stacking and 2) leaving salary cap.